Referring to economic hardships facing the people, Grand Ayatollah Noori Hamadani appealed the authorities to pay attention to the problems gripping the society. "The authorities should not be indifferent toward the problems," he stressed. 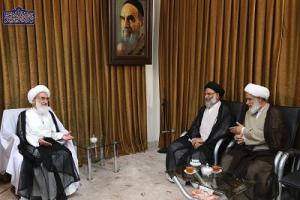 According to the official website of Grand Ayatollah Noori Hamedani, in a meeting with the representative of Iran's Supreme Leader in Khuzestan, His Eminence said that there are and have been great scholars, and outstanding jurisprudents in Khuzestan. Praising the religious scholars and the representative of the Supreme Leader, Ayatollah Noori Hamedani stated that the leadership of Friday congregational prayer is one of the most important institutions with tremendous responsibilities to fulfill.

He added, "Since I have the experience of leading Friday congregational prayers, I know that it is really difficult to undertake this responsibility; because people have many expectations considering the prayer leader as a bridge between the government and themselves. The Friday prayer leader should never get frustrated; because the way he behaves with people and conducts himself is very important."

He went on saying, "Being revolutionary and knowing the truths of the revolution are the main characteristics of a qualified Friday prayer leader.  Good morals and humility are other characteristics of the congregational Friday prayer leaders. That is due to the fact that they can be effective among the people only through humbleness and good behavior. People want someone who truly cares for them, and they must feel it."

Grand Ayatollah Noori Hamedani emphasized that Friday prayer leaders must be careful to maintain their respect and dignity; because this position is attributed to Wilayah (guardianship). They must be revolutionary and keep the people of their regions revolutionary and optimistic toward the revolution, albeit with good morals, logic, reason and arguments.

He stated, "Cultural activities, raising political awareness of the people and explaining the effects, benefits and blessings of the revolution to the people should be the priorities of the Friday prayer leaders. They must try their best to maintain the position of the religious scholars, and the scholars too should strengthen their position through attracting maximum number of the people. The prayer leader should not neglect the hardships of the people; rather, they should always stand by them."

Speaking about the economic hardships facing the people, Grand Ayatollah Noori Hamadani appealed the authorities to pay attention to the problems gripping the society, "The authorities should sympathize with people, solve their problems and not to be indifferent toward them," His Eminence stressed

His eminence mentioned, "People seek refuge in clerics, and the clerics must run and guide the society.  The clerical institution has always been with the people and we witnessed that clerics took even shovels to help the injured and affected people in catastrophic events.

He added, "We must be careful about the Saudi's and Salafi's influence in Khuzestan.  Of course, people are aware and are vigilant, but necessary precaution must be exercised."

Commending the Supreme leader’s strong positions against the US, Ayatollah Noori Hamedani said, "People love dignity, greatness and dignity on account of which they gave sacrifices, and after the supreme leaders' speech that gave us dignity, we witnessed the happiness of the people and society."

He added, "The spirit of seeking dignity and independence among people must be preserved, the enemies of Islam and revolution like the US and Europeans who are the leaders of arrogant and oppressive powers will never accept Iran's terms and conditions. If the western countries speak of JCPOA agreement, it does not mean that they mean to help Iran; instead, they are seeking to influence the country.

Referring to the recent developments in France, Ayatollah Noori Hamedani stated, "The French president and the US say they are willing to help improve the situation in Iran; whereas if they can, they should fix their own problems. Raising public awareness about the international developments is one the significant duties of religious scholars."