Summit in Bahrain, Grand Ayatollah Noori Hamedani stressed, "Today, the oppressive and occupying regime of Israel wants to occupy half of the land of Palestine and give the other half to the Palestinians as part of a deal called "the Deal of the Century". Undoubtedly, insofar as this cancerous tumor continues to exist, the countries in the region will not be safe and secure 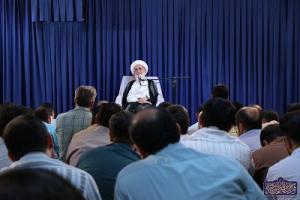 Speaking to a number of officials in charge of the art and cultural center affiliated to Basij Mostazafin Organization, Grand Ayatollah Noori Hamedani reminded the audience of the enemies' fear of the Jihadi and martyrdom seeking spirit of the Iranian nation. He stressed on the need for dealing with the enemy from a position of strength and leverage. "Enemies like Trump and the Zionists cannot be made to retreat with a soft approach. In fact, it is essential that we speak to them from a position of strength and power. Today, we must know that only by promoting and boosting the culture of sacrifice and martyrdom can we go to war against the enemy and make them retreat," His Eminence said.

Grand Ayatollah Noori Hamedani (may he live long) described the glorious revolution of the Islamic Republic of Iran as one of the divine bounties bestowed upon the Iranian nation. "We must thank Allah for this great bounty or else we will be afflicted with divine punishment for being ungrateful."

He further said that one of the blessings of the Islamic revolution is the freedom people achieved from monarchical tyranny and despotism.  "The people of Iran suffered injustice and tyranny for years but the Islamic revolution gave them power and dignity and changed them into a powerful nation. During the Pahlavid regime, we had lost our cultural, political and social identity, so we had to adapt ourselves in every single matter to the demands of Western powers. For many years the enemies of Iran were looting and plundering our resources keeping the people in sheer indigence and poverty" he concluded.

Grand Ayatollah Noori Hamedani further added, "Before the revolution, the people of Iran were considered to be a savage and backward nation. Today, however, the world's imperial power has lost its control on the country and all of the enemies of our nation acknowledge that without the will of the Iranian people, they cannot do anything in the Middle East."

His Eminence pointed out that Imam Khominei, the founder of the Islamic revolution, earned the Iranian nation self-confidence and dignity because the people of Iran were Westoxicated and had lost their own identity but the Islamic revolution not only restored their real identity and self-confidence but it also helped them become self-sufficient and stand on their own feet.

He reiterated that the Islamic revolution helped revive the culture of Jihad and martyrdom. Meanwhile, he underscored the importance of reading and studying Imam Khomeini's Sahifa-e Noor [Collection of Speeches and Letters].

Referring to the "Deal of the Century" Summit in Bahrain, Grand Ayatollah Noori Hamedani stressed, "Today, the oppressive and occupying regime of Israel wants to occupy half of the land of Palestine and give the other half to the Palestinians as part of a deal called "the Deal of the Century". Undoubtedly, insofar as this cancerous tumor continues to exist, the countries in the region will not be safe and secure. Imam Khomeini (ra) said that the Zionist regime is the base of arrogance. Therefore, we must make efforts to destroy it."

Referring to the verse 7 of Chapter Ibrahim in the beginning of the meeting, Grand Ayatollah Noori Hamedani said that there are 73 verses in different parts of the Quran with emphasis on the importance of gratefulness and giving thanks to Allah. "One of man's duties is to know God's bounties and to thank Him for His munificence because gratefulness results in barakah and abundance," His Eminence said.

He went on saying that those who are active in the area of culture and arts need to pay attention to brilliant Persian works such as the collections of poems accomplished by Sa'di, Hafiz and Firdowsi.

Referring to the status of pious people in the hereafter, Grand Ayatollah Noori Hamedani said, "When pious and God-fearing people set out to go to Paradise, the angels and those with whom Allah's secrets are deposited go to welcome and praise them."