Referring to the enemies' conspiracies to create discord between the two Muslim nations of Iran and Iraq, Grand Ayatollah Noori Hamedani stressed that the enemy can never impair the unity and brotherhood of the two countries. 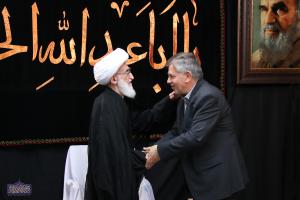 In a meeting with Iraq's ambassador to Iran, Grand Ayatollah Noori Hamedani (may he live long) said that Iran and Iraq have always been united with each other, and that their "unity has been and is cultural, historical and political".

"Iran and Iraq are two brother countries, and they have been with each other for many years. The enemy is trying to create discord between these countries but it has failed no matter how hard it has endeavored and how much it has invested in it," His Eminence added.

His Eminence went on saying that the ISIS and Takfiri terrorist groups in Iraq and Syria were created as part of the conspiracies hatched against the two nations.  "Despite these conspiracies, today we see that the relations and brotherhood of the two nations of Iraq and Iran have grown stronger, and the enemy has failed in its attempts," he noted.

"Fortunately, the people of Iraq are people with a great culture; they love the Ahlulbayt and the religion. Indeed, with the help of the mobilization forces and resistance groups, they did not allow the enemies to achieve their goals in this country. Today, the enemy seeks to create discord between Iran and Iraq but they will never succeed," he further added.

Grand Ayatollah Noori Hamedani stressed on strengthening Iran-Iraq unity and said that each year thousands of Iranians attend the great Arbaeen rally in Iraq and the number is increasing with each passing year. "The Iranian nation is with the Iraqi nation in loving the Ahlulbayt (AS) and serving their cause," he said.

His Eminence described Arbaeen as the expression of the power of the two nations of Iraq and Iran. "No power other Islam and Wilayah (guardianship of the Ahlulbayt) can bring together millions of people in the same place. In Makkah and Medina, the number of pilgrims do not exceed three millions but we see that during Arbaeen more than 20 millions of people participate in the procession," he added.

This great religious authority further noted, "We thank the Iraqi nation and government for their generosity and hospitality towards the Arbaeen pilgrims, and hope the brotherhood and unity of the two countries grow stronger than ever before."