Grand Ayatollah Noori Hamedani warned about the execution of the shameful plan of the deal of the century. He appealed the Muslim Ummah, especially Islamic scholars, to come to the scene and seriously confront the conspiracy which aims to destroy the Palestinian cause. 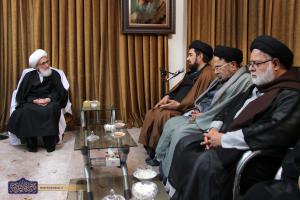 Speaking at a gathering of Indian scholars in Qom on February 1st, Grand Ayatollah Noori Hamedani referred to the important mission of Muslim scholars and clerical institution and said, “In Islam, it is planned such that a few people with Islamic ethics be among the people and invite them toward good, uprightness and happiness.”

His Eminence further added, "Today, we have a highly important responsibility. In Islam, no stratum of society enjoys as much dignity, virtue and status as the scholars and no group of people has as huge a responsibility as the scholars. Just as Islam respects and dignifies a scholar and considers even looking at his face a form of 'ibadah (act of worship), so too it has placed a heavy burden on him."

His Eminence said that today, the enemies of Islam, especially the United States and the Zionists, are trying to destroy the Palestinian cause with a new conspiracy – the Deal of the Century – and said, “What crime and sin is greater than this? Muslims must be united and be present on the scene.”

Grand Ayatollah Noori Hamedani went on saying, “Islamic scholars must not be silent but must unite around al-Quds (Jerusalem) and pursue Islamic ideals. We can’t be spectators because Islam has placed a heavy burden on the scholars and everyone must fulfill their duty.”

His Eminence emphasized, “The scholars can’t be silent spectators in the face of the Americans and Zionists' destroying Palestine and taking over al-Quds. If scholars and the Muslim mass unite, they can do great things.”

“Today isn’t a day to be spectators, but to come to the scene and thwart the enemies’ conspiracies. There are no geographical boundaries in Islam and all of the Muslims of the world are brothers of one another and must be united. If we only lecture and watch, we will be responsible in front of God,” he noted.

Ayatollah Noori Hamedani said, “The enemies aren’t calm for even a single moment, and there is always a program of creating a rift and discord among Muslims. We must never think that the enemies will give up their hatred, because they come to fight Islam with better gear and more sophisticated weapons. In such situations, we must fulfill our duties to defeat the enemies, and in order to be able to defeat the enemies, the Muslim nations must be united.”