Grand Ayatollah Noor Hamedani described the presence of millions of Iranians in 22 Bahman rallies as a manifestation of the glory and greatness of the Islamic revolution.  He said that the message the strong presence of people sends out is that they will continue to decisively confront their enemies. 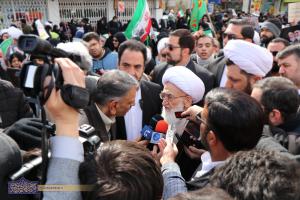 Speaking on the sidelines of 22 Bahman rallies in Qom this morning, Grand Ayatollah Noori Hamedani praised the Iranian people's revolutionary presence on the scene. Meanwhile, he added that the people's epic presence demonstrates the glory, unity and greatness of the Islamic Revolution.

He further said, "This revolutionary presence encourages the Iranian people and gives Muslim nations and the axis of resistance renewed hope. On the other hand, this presence represents anger and resentment at the global arrogance and Zionists as well as underscores resistance to them."

Grand Ayatollah Noor Hamedani reiterated that the presence of people was a punch on the mouth of American hawks and that the Iranian nation today declared its hatred and resentment toward American terrorists.

He continued, "This glory and unity cause the enemies to fail in their attempts, and precipitate the achievement of the goals and aspirations of the Islamic Revolution."