Today one of the issues, and perhaps the most important of them, in the Islamic world and international arena is the issue of the holy Quds and Palestine. 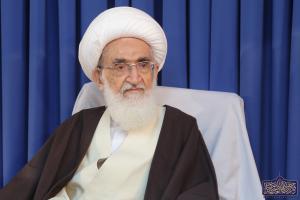 Today one of the issues, and perhaps the most important of them, in the Islamic world and international arena is the issue of the holy Quds and Palestine.

The text of His Eminence's message is as follows:

In the Name of Allah, the Compassionate the Merciful

Praise is due to the Lord of the Worlds, the Creator of the Universe, the Sender of the prophets and messengers, and peace and benedictions be upon the bearer of glad-tidings, the Warner and shining torch, our master and prophet Abul Qasim al-Mustafa Muhammad, peace be upon him and his pure progeny, especially the Remainder from Allah on the Earths – may Allah hasten his reappearance.

I wish to convey my greetings to that esteemed assembly which has been held in the attendance of scientific and political elites to commemorate the Quds Day.  Today one of the issues, and perhaps the most important of them, in the Islamic world and international arena is the issue of the holy Quds and Palestine. A highly valuable point emphasized and reaffirmed in the Holy Qur'an is the struggle against tyranny and injustice as well as supporting the oppressed. "Why should you not fight for God's sake when men, women, and children who are considered helpless say: "Our Lord, lead us out of this town whose people are so oppressive..!" (Qur'an 4:75)  As well, the Qur'an says, "Those who believe, and have migrated and struggled for God's sake with their property and persons, as well as those who have given them asylum and support, [will find] some of those are friends of one another. You do not owe any protection to those who believe and have not migrated, until they become refugees. If they should plead for support however from you concerning religious matters, you must support them except against any folk with whom you have made a treaty. God is Observant of anything you do." (8:72)

Unfortunately, the human rights organizations and the Islamic organizations, and some Muslims, especially those who publish millions of Qurans a year and distribute them around the world falsely depicting themselves as servants of the Quran and the two Sacred Sanctuaries, have ignored these verses and failed to act upon them. And again, it is with great regret that some of the leaders of the Islamic world are helping the oppressors, trampling on the rights of the oppressed nations, especially the Palestinians, supporting the Zionists' and imperial powers' tyranny and oppression with their clandestine help and compromises or with their deadly silence. Thus, they are undermining the first and foremost important issue of the Islamic world which is the problem of Quds. For many years now, the so-called great powers have been trying to cause the Quds issue to be put into oblivion, but despite restrictions imposed by some governments, it has been kept alive in the last forty years, thanks to the initiative of the great Leader of the Islamic Revolution of Iran, late Imam Khomeini (may Allah bless him), as well as to the help of devout and passionate Muslims across the world that have led to the disgrace of the occupying, child-murdering and fake Zionist regime. Turning the Quds Day into a great Islamic day, the late founder of the Islamic Revolution introduced Zionism as a cancerous tumor.

The Quds day must continue to remain an important international day, and this year, due to Coronavirus pandemic, the people will have to express their support for the Palestinians and holy Quds as well as their disgust towards the arrogant powers, Zionism and their hypocrisy in any way deemed appropriate by the government officials and healthcare experts.

Today, the elites and every free and conscientious human being must not tolerate the ongoing oppression or remain silent. We must work to realize the rights of this oppressed nation and return Quds, the beating heart of the Islamic world, to the Muslims. The Muslims must pave the way for victory with unity and empathy. It must be made clear to the whole world that no one has the right to determine the fate of the Palestinian people except the Palestinians themselves, and that a fake regime called Israel must withdraw from the region as soon as possible so that the nations that lived together before the establishment of this occupying regime may live peacefully.

On the seventy-second anniversary of the Zionist regime's invasion of Palestine, the media is expected to fulfill its mission and bring the crimes committed by this murderous regime to the attention of the oppressed people of the world. This is their mission which they should fulfill. Israel must know that the time of its destruction has come and Quds will soon be liberated by the Muslim youth and this oppressive regime will be destroyed.

I condemn the arrogant powers and  Zionists and their collaborators for the tyranny and atrocities committed by them around the world especially in Palestine, and once again declare my support and solidarity with all the resistance forces in the region and the oppressed people of Palestine.

In the end, I would like to thank the organizers of this conference and pray to Allah Almighty for everyone's success. "Believers, if you help Allah, He will help you and strengthen your feet." (47:7)