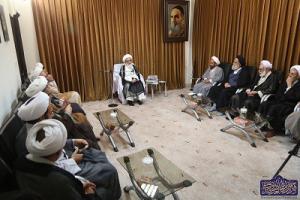 According to the official website of Grand Ayatollah Noori Hamedani (may he live long), in a meeting with people in charge of the Institute for Jurisprudential Subject Knowledge, His Eminence underscored the importance of knowledge of jurisprudential subjects. "Today jurisprudential research has to be conducted in modern and current-day issues and the findings have to be placed at the disposal of Muslims and Islamic society," he stressed.

Grand Ayatollah Noori Hamedani further noted that Shiite scholars are heirs to an immense and rich juridical legacy and that no jurisprudential school has as many jurisprudential documents and literature as the Shia school of law. As well, no denomination's scholars are as well-versed in jurisprudence as Shia scholars. His Eminence stressed on the need for celebrating and having regard for early Muslim scholars. "We must honor early Muslim scholars and their achievements. Meanwhile, we must know that the modern era has its own specific requirements with relevant research and scientific endeavor," he noted.

His Eminence further stressed on the need for identifying the needs carefully and patiently and then generating the necessary content. He gave the example of Jihad which early Muslim scholars had divided into two types e.g. defensive Jihad and Jihad against the Kharijites whereas Imam Khomeini (ra) has divided Jihad into eight categories.

Speaking about the need for expanding jurisprudential studies, His Eminence said, "We should understand the fact that the Islamic seminary needs to transform its research method in legal and jurisprudential area and that more attention has to be paid to the verses of the Holy Quran."

Grand Ayatollah Noori Hamedani went on stressing on the need for recruiting eligible and qualified people in managerial areas. "All of should seek to serve Islam and Muslims and in order for this goal to be realized, we must pave the way for people who are more scrupulous and sincere," he said.