An opening ceremony marking the beginning of the new academic year of the ‎Islamic Seminaries was held in Fayziyyah School in the morning of September 14th in the presence of Grand ‎Ayatollah Noori Hamedani and other renowned scholars. 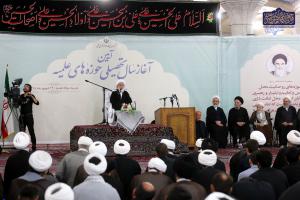 Addressing the gathering, Grand ‎Ayatollah Noori Hamedani called on all clerics and clerical institutions to avoid wasteful and luxury lifestyle. "According to traditions and reports transmitted from the infallible leaders, those scholars who enjoy aristocratic and luxury lifestyles are deemed bandits of people's religion. All of us must mingle with people, live with them and serve them," His Eminence stressed.

He further said that action speaks louder than words and that the clerics need to invite people to the religion through their action rather than through exhorting them. He went on saying that the first stage for the students of the Islamic seminaries to guide people is to engage in studying Islamic sciences and acquiring knowledge.

His Eminence stressed on the need to pay attention to [Arabic] literature and to make up one's mind to engage in Islamic studies so that he may, like prominent scholars, be able to protect the religion and the principles of faith with his knowledge.

He elaborated on the relationship between struggle and success, and said that the harder a student works the more successful he would be. As well, he said that being regular and organized is yet another important condition to succeed in life. "Whoever is well-organized in his life will be successful," he noted.

He further said, "It is important that student wake up early, keep night vigil to live a spiritual life. For this reason, the students must wake up before dawn to offer Tahajjud Prayer so that God, the Exalted, may shower His blessing upon them and place the fundamentals of faith in their hearts. We read in the biographies of early Shiite scholars that they did not teach those who did not establish Tahajjud Prayer."

Highlighting the need for lessons on morality in the Islamic seminaries, Grand Ayatollah Noori Hamedani said, "Lessons on ethics and morality must be taught in the seminaries because all of us need teachers to teach us lessons on Islamic morality."

His Eminence further elaborated on the importance of gaining profound knowledge and its role in the success of seminary scholars. "In-depth knowledge is crucial to promotion of religious students. Therefore, if they want to make a difference in the future, they must acquire deep and profound understanding of Islamic sciences," he reiterated.

Grand Ayatollah Noori Hamedani further drew the attention of the audience to the biography and normative conducts of prominent Muslim scholars urging them to learn from their lives in order to achieve success. He also said that the students need to understand jurisprudence and legal rules well so that they may be able to acquaint others with the Islamic lifestyle.

His Eminence further added, "No one should separate the religion from politics. The students and clerics should, in addition to studying their lessons, engage in politics and social activities. They should not think that they have nothing to do with political and social issues. Today, the seminaries must not be indifferent towards the injustices and brutalities committed on the oppressed Muslims in Kashmir and Bahrain."